The stillness consequent on the cessation of the rumbling and labouring of the coach, added to the stillness of the night, made it very quiet indeed. The panting of the horses communicated a tremulous motion to the coach, as if it were in a state of agitation. The hearts of the passengers beat loud enough perhaps to be heard; but at any rate, the quiet pause was audibly expressive of people out of breath, and holding the breath, and having the pulses quickened by expectation.

The sound of a horse at a gallop came fast and furiously up the hill.

The pace was suddenly checked, and, with much splashing and floundering, a man’s voice called from the mist, “Is that the Dover mail?”

“Never you mind what it is!” the guard retorted. “What are you?”

“Is that the Dover mail?”

Our booked passenger showed in a moment that it was his name. The guard, the coachman, and the two other passengers eyed him distrustfully.

“Keep where you are,” the guard called to the voice in the mist, “because, if I should make a mistake, it could never be set right in your lifetime. Gentleman of the name of Lorry answer straight.”

“What is the matter?” asked the passenger, then, with mildly quavering speech. “Who wants me? Is it Jerry?”

(“I don’t like Jerry’s voice, if it is Jerry,” growled the guard to himself. “He’s hoarser than suits me, is Jerry.”)

“What is the matter?”

“A despatch sent after you from over yonder. T. and Co.”

“I know this messenger, guard,” said Mr. Lorry, getting down into the road—assisted from behind more swiftly than politely by the other two passengers, who immediately scrambled into the coach, shut the door, and pulled up the window. “He may come close; there’s nothing wrong.”

“I hope there ain’t, but I can’t make so ‘Nation sure of that,” said the guard, in gruff soliloquy. “Hallo you!”

“Well! And hallo you!” said Jerry, more hoarsely than before. 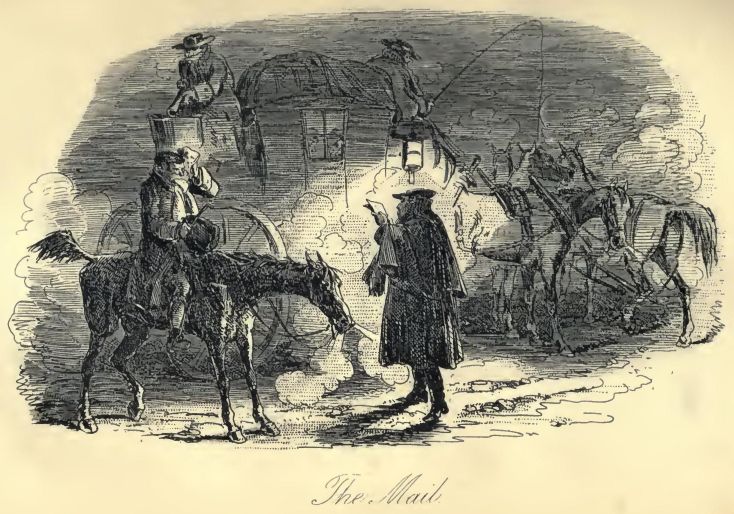 “Come on at a footpace! d’ye mind me? And if you’ve got holsters to that saddle o’ yourn, don’t let me see your hand go nigh ’em. For I’m a devil at a quick mistake, and when I make one it takes the form of Lead. So now let’s look at you.”

The figures of a horse and rider came slowly through the eddying mist, and came to the side of the mail, where the passenger stood. The rider stooped, and, casting up his eyes at the guard, handed the passenger a small folded paper. The rider’s horse was blown, and both horse and rider were covered with mud, from the hoofs of the horse to the hat of the man.

“Guard!” said the passenger, in a tone of quiet business confidence.

The watchful guard, with his right hand at the stock of his raised blunderbuss, his left at the barrel, and his eye on the horseman, answered curtly, “Sir.”

“There is nothing to apprehend. I belong to Tellson’s Bank. You must know Tellson’s Bank in London. I am going to Paris on business. A crown to drink. I may read this?”

He opened it in the light of the coach-lamp on that side, and read—first to himself and then aloud: “’Wait at Dover for Mam’selle.’ It’s not long, you see, guard. Jerry, say that my answer was, Recalled to life.”

Jerry started in his saddle. “That’s a Blazing strange answer, too,” said he, at his hoarsest.

“Take that message back, and they will know that I received this, as well as if I wrote. Make the best of your way. Good night.”

With those words the passenger opened the coach-door and got in; not at all assisted by his fellow-passengers, who had expeditiously secreted their watches and purses in their boots, and were now making a general pretence of being asleep. With no more definite purpose than to escape the hazard of originating any other kind of action.

The coach lumbered on again, with heavier wreaths of mist closing round it as it began the descent. The guard soon replaced his blunderbuss in his arm-chest, and, having looked to the rest of its contents, and having looked to the supplementary pistols that he wore in his belt, looked to a smaller chest beneath his seat, in which there were a few smith’s tools, a couple of torches, and a tinder-box. For he was furnished with that completeness that if the coach-lamps had been blown and stormed out, which did occasionally happen, he had only to shut himself up inside, keep the flint and steel sparks well off the straw, and get a light with tolerable safety and ease (if he were lucky) in five minutes.

“Tom!” softly over the coach roof.

“Did you hear the message?”

“That’s a coincidence, too,” the guard mused, “for I made the same of it myself.”

Jerry, left alone in the mist and darkness, dismounted meanwhile, not only to ease his spent horse, but to wipe the mud from his face, and shake the wet out of his hat-brim, which might be capable of holding about half a gallon. After standing with the bridle over his heavily-splashed arm, until the wheels of the mail were no longer within hearing and the night was quite still again, he turned to walk down the hill.

“After that there gallop from Temple Bar, old lady, I won’t trust your fore-legs till I get you on the level,” said this hoarse messenger, glancing at his mare. “’Recalled to life.’ That’s a Blazing strange message. Much of that wouldn’t do for you, Jerry! I say, Jerry! You’d be in a Blazing bad way, if recalling to life was to come into fashion, Jerry!”