“I asked leave to teach myself, and I got it with much difficulty after a long while, and I have made shoes ever since.”

As he held out his hand for the shoe that had been taken from him, Mr. Lorry said, still looking steadfastly in his face:

“Monsieur Manette, do you remember nothing of me?”

The shoe dropped to the ground, and he sat looking fixedly at the questioner.

“Monsieur Manette”; Mr. Lorry laid his hand upon Defarge’s arm; “do you remember nothing of this man? Look at him. Look at me. Is there no old banker, no old business, no old servant, no old time, rising in your mind, Monsieur Manette?”

As the captive of many years sat looking fixedly, by turns, at Mr. Lorry and at Defarge, some long obliterated marks of an actively intent intelligence in the middle of the forehead, gradually forced themselves through the black mist that had fallen on him. They were overclouded again, they were fainter, they were gone; but they had been there. And so exactly was the expression repeated on the fair young face of her who had crept along the wall to a point where she could see him, and where she now stood looking at him, with hands which at first had been only raised in frightened compassion, if not even to keep him off and shut out the sight of him, but which were now extending towards him, trembling with eagerness to lay the spectral face upon her warm young breast, and love it back to life and hope—so exactly was the expression repeated (though in stronger characters) on her fair young face, that it looked as though it had passed like a moving light, from him to her.

Darkness had fallen on him in its place. He looked at the two, less and less attentively, and his eyes in gloomy abstraction sought the ground and looked about him in the old way. Finally, with a deep long sigh, he took the shoe up, and resumed his work.

“Have you recognised him, monsieur?” asked Defarge in a whisper.

“Yes; for a moment. At first I thought it quite hopeless, but I have unquestionably seen, for a single moment, the face that I once knew so well. Hush! Let us draw further back. Hush!”

She had moved from the wall of the garret, very near to the bench on which he sat. There was something awful in his unconsciousness of the figure that could have put out its hand and touched him as he stooped over his labour.

Not a word was spoken, not a sound was made. She stood, like a spirit, beside him, and he bent over his work.

It happened, at length, that he had occasion to change the instrument in his hand, for his shoemaker’s knife. It lay on that side of him which was not the side on which she stood. He had taken it up, and was stooping to work again, when his eyes caught the skirt of her dress. He raised them, and saw her face. The two spectators started forward, but she stayed them with a motion of her hand. She had no fear of his striking at her with the knife, though they had.

He stared at her with a fearful look, and after a while his lips began to form some words, though no sound proceeded from them. By degrees, in the pauses of his quick and laboured breathing, he was heard to say:

With the tears streaming down her face, she put her two hands to her lips, and kissed them to him; then clasped them on her breast, as if she laid his ruined head there.

“You are not the gaoler’s daughter?”

Not yet trusting the tones of her voice, she sat down on the bench beside him. He recoiled, but she laid her hand upon his arm. A strange thrill struck him when she did so, and visibly passed over his frame; he laid the knife down softly, as he sat staring at her.

Her golden hair, which she wore in long curls, had been hurriedly pushed aside, and fell down over her neck. Advancing his hand by little and little, he took it up and looked at it. In the midst of the action he went astray, and, with another deep sigh, fell to work at his shoemaking. 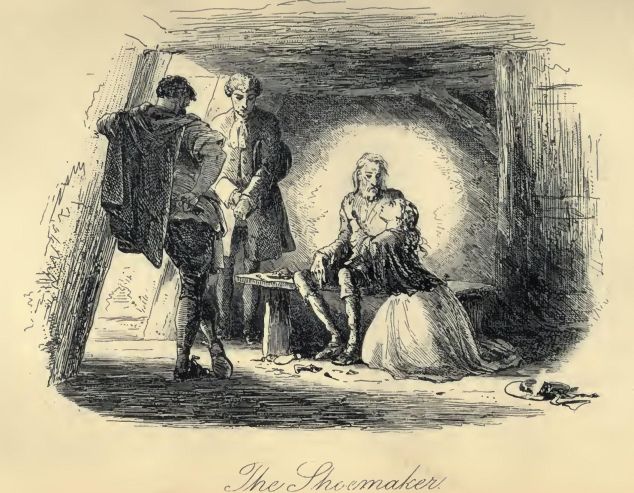 But not for long. Releasing his arm, she laid her hand upon his shoulder. After looking doubtfully at it, two or three times, as if to be sure that it was really there, he laid down his work, put his hand to his neck, and took off a blackened string with a scrap of folded rag attached to it. He opened this, carefully, on his knee, and it contained a very little quantity of hair: not more than one or two long golden hairs, which he had, in some old day, wound off upon his finger.

He took her hair into his hand again, and looked closely at it. “It is the same. How can it be! When was it! How was it!”

As the concentrated expression returned to his forehead, he seemed to become conscious that it was in hers too. He turned her full to the light, and looked at her.

“She had laid her head upon my shoulder, that night when I was summoned out—she had a fear of my going, though I had none—and when I was brought to the North Tower they found these upon my sleeve. ‘You will leave me them? They can never help me to escape in the body, though they may in the spirit.’ Those were the words I said. I remember them very well.”

He formed this speech with his lips many times before he could utter it. But when he did find spoken words for it, they came to him coherently, though slowly.

Once more, the two spectators started, as he turned upon her with a frightful suddenness. But she sat perfectly still in his grasp, and only said, in a low voice, “I entreat you, good gentlemen, do not come near us, do not speak, do not move!”

“Hark!” he exclaimed. “Whose voice was that?”

His hands released her as he uttered this cry, and went up to his white hair, which they tore in a frenzy. It died out, as everything but his shoemaking did die out of him, and he refolded his little packet and tried to secure it in his breast; but he still looked at her, and gloomily shook his head.

“No, no, no; you are too young, too blooming. It can’t be. See what the prisoner is. These are not the hands she knew, this is not the face she knew, this is not a voice she ever heard. No, no. She was—and He was—before the slow years of the North Tower—ages ago. What is your name, my gentle angel?”

Hailing his softened tone and manner, his daughter fell upon her knees before him, with her appealing hands upon his breast.

“O, sir, at another time you shall know my name, and who my mother was, and who my father, and how I never knew their hard, hard history. But I cannot tell you at this time, and I cannot tell you here. All that I may tell you, here and now, is, that I pray to you to touch me and to bless me. Kiss me, kiss me! O my dear, my dear!”

His cold white head mingled with her radiant hair, which warmed and lighted it as though it were the light of Freedom shining on him.

She held him closer round the neck, and rocked him on her breast like a child.