He answered, in a tone that went to every heart, “A long imprisonment.”

“Were you newly released on the occasion in question?”

“Have you no remembrance of the occasion?”

“None. My mind is a blank, from some time—I cannot even say what time—when I employed myself, in my captivity, in making shoes, to the time when I found myself living in London with my dear daughter here. She had become familiar to me, when a gracious God restored my faculties; but, I am quite unable even to say how she had become familiar. I have no remembrance of the process.”

Mr. Attorney-General sat down, and the father and daughter sat down together.

A singular circumstance then arose in the case. The object in hand being to show that the prisoner went down, with some fellow-plotter untracked, in the Dover mail on that Friday night in November five years ago, and got out of the mail in the night, as a blind, at a place where he did not remain, but from which he travelled back some dozen miles or more, to a garrison and dockyard, and there collected information; a witness was called to identify him as having been at the precise time required, in the coffee-room of an hotel in that garrison-and-dockyard town, waiting for another person. The prisoner’s counsel was cross-examining this witness with no result, except that he had never seen the prisoner on any other occasion, when the wigged gentleman who had all this time been looking at the ceiling of the court, wrote a word or two on a little piece of paper, screwed it up, and tossed it to him. Opening this piece of paper in the next pause, the counsel looked with great attention and curiosity at the prisoner.

“You say again you are quite sure that it was the prisoner?”

The witness was quite sure.

“Did you ever see anybody very like the prisoner?”

Not so like (the witness said) as that he could be mistaken.

“Look well upon that gentleman, my learned friend there,” pointing to him who had tossed the paper over, “and then look well upon the prisoner. How say you? Are they very like each other?”

Allowing for my learned friend’s appearance being careless and slovenly if not debauched, they were sufficiently like each other to surprise, not only the witness, but everybody present, when they were thus brought into comparison. My Lord being prayed to bid my learned friend lay aside his wig, and giving no very gracious consent, the likeness became much more remarkable. My Lord inquired of Mr. Stryver (the prisoner’s counsel), whether they were next to try Mr. Carton (name of my learned friend) for treason? But, Mr. Stryver replied to my Lord, no; but he would ask the witness to tell him whether what happened once, might happen twice; whether he would have been so confident if he had seen this illustration of his rashness sooner, whether he would be so confident, having seen it; and more. The upshot of which, was, to smash this witness like a crockery vessel, and shiver his part of the case to useless lumber.

Mr. Cruncher had by this time taken quite a lunch of rust off his fingers in his following of the evidence. He had now to attend while Mr. Stryver fitted the prisoner’s case on the jury, like a compact suit of clothes; showing them how the patriot, Barsad, was a hired spy and traitor, an unblushing trafficker in blood, and one of the greatest scoundrels upon earth since accursed Judas—which he certainly did look rather like. How the virtuous servant, Cly, was his friend and partner, and was worthy to be; how the watchful eyes of those forgers and false swearers had rested on the prisoner as a victim, because some family affairs in France, he being of French extraction, did require his making those passages across the Channel—though what those affairs were, a consideration for others who were near and dear to him, forbade him, even for his life, to disclose. How the evidence that had been warped and wrested from the young lady, whose anguish in giving it they had witnessed, came to nothing, involving the mere little innocent gallantries and politenesses likely to pass between any young gentleman and young lady so thrown together;—with the exception of that reference to George Washington, which was altogether too extravagant and impossible to be regarded in any other light than as a monstrous joke. How it would be a weakness in the government to break down in this attempt to practise for popularity on the lowest national antipathies and fears, and therefore Mr. Attorney-General had made the most of it; how, nevertheless, it rested upon nothing, save that vile and infamous character of evidence too often disfiguring such cases, and of which the State Trials of this country were full. But, there my Lord interposed (with as grave a face as if it had not been true), saying that he could not sit upon that Bench and suffer those allusions.

Mr. Stryver then called his few witnesses, and Mr. Cruncher had next to attend while Mr. Attorney-General turned the whole suit of clothes Mr. Stryver had fitted on the jury, inside out; showing how Barsad and Cly were even a hundred times better than he had thought them, and the prisoner a hundred times worse. Lastly, came my Lord himself, turning the suit of clothes, now inside out, now outside in, but on the whole decidedly trimming and shaping them into grave-clothes for the prisoner.

And now, the jury turned to consider, and the great flies swarmed again.

Mr. Carton, who had so long sat looking at the ceiling of the court, changed neither his place nor his attitude, even in this excitement. While his learned friend, Mr. Stryver, massing his papers before him, whispered with those who sat near, and from time to time glanced anxiously at the jury; while all the spectators moved more or less, and grouped themselves anew; while even my Lord himself arose from his seat, and slowly paced up and down his platform, not unattended by a suspicion in the minds of the audience that his state was feverish; this one man sat leaning back, with his torn gown half off him, his untidy wig put on just as it had happened to light on his head after its removal, his hands in his pockets, and his eyes on the ceiling as they had been all day. Something especially reckless in his demeanour, not only gave him a disreputable look, but so diminished the strong resemblance he undoubtedly bore to the prisoner (which his momentary earnestness, when they were compared together, had strengthened), that many of the lookers-on, taking note of him now, said to one another they would hardly have thought the two were so alike. Mr. Cruncher made the observation to his next neighbour, and added, “I’d hold half a guinea that he don’t get no law-work to do. Don’t look like the sort of one to get any, do he?”

Yet, this Mr. Carton took in more of the details of the scene than he appeared to take in; for now, when Miss Manette’s head dropped upon her father’s breast, he was the first to see it, and to say audibly: “Officer! look to that young lady. Help the gentleman to take her out. Don’t you see she will fall!”

There was much commiseration for her as she was removed, and much sympathy with her father. It had evidently been a great distress to him, to have the days of his imprisonment recalled. He had shown strong internal agitation when he was questioned, and that pondering or brooding look which made him old, had been upon him, like a heavy cloud, ever since. As he passed out, the jury, who had turned back and paused a moment, spoke, through their foreman.

They were not agreed, and wished to retire. My Lord (perhaps with George Washington on his mind) showed some surprise that they were not agreed, but signified his pleasure that they should retire under watch and ward, and retired himself. The trial had lasted all day, and the lamps in the court were now being lighted. It began to be rumoured that the jury would be out a long while. The spectators dropped off to get refreshment, and the prisoner withdrew to the back of the dock, and sat down.

Mr. Lorry, who had gone out when the young lady and her father went out, now reappeared, and beckoned to Jerry: who, in the slackened interest, could easily get near him.

“Jerry, if you wish to take something to eat, you can. But, keep in the way. You will be sure to hear when the jury come in. Don’t be a moment behind them, for I want you to take the verdict back to the bank. You are the quickest messenger I know, and will get to Temple Bar long before I can.”

Jerry had just enough forehead to knuckle, and he knuckled it in acknowledgment of this communication and a shilling. Mr. Carton came up at the moment, and touched Mr. Lorry on the arm.

“How is the young lady?”

“She is greatly distressed; but her father is comforting her, and she feels the better for being out of court.”

“I’ll tell the prisoner so. It won’t do for a respectable bank gentleman like you, to be seen speaking to him publicly, you know.”

Mr. Lorry reddened as if he were conscious of having debated the point in his mind, and Mr. Carton made his way to the outside of the bar. The way out of court lay in that direction, and Jerry followed him, all eyes, ears, and spikes.

“You will naturally be anxious to hear of the witness, Miss Manette. She will do very well. You have seen the worst of her agitation.”

“I am deeply sorry to have been the cause of it. Could you tell her so for me, with my fervent acknowledgments?”

Mr. Carton’s manner was so careless as to be almost insolent. He stood, half turned from the prisoner, lounging with his elbow against the bar.

“I do ask it. Accept my cordial thanks.”

“What,” said Carton, still only half turned towards him, “do you expect, Mr. Darnay?”

“It’s the wisest thing to expect, and the likeliest. But I think their withdrawing is in your favour.”

Loitering on the way out of court not being allowed, Jerry heard no more: but left them—so like each other in feature, so unlike each other in manner—standing side by side, both reflected in the glass above them.

An hour and a half limped heavily away in the thief-and-rascal crowded passages below, even though assisted off with mutton pies and ale. The hoarse messenger, uncomfortably seated on a form after taking that refection, had dropped into a doze, when a loud murmur and a rapid tide of people setting up the stairs that led to the court, carried him along with them.

“Jerry! Jerry!” Mr. Lorry was already calling at the door when he got there.

Mr. Lorry handed him a paper through the throng. “Quick! Have you got it?”

Hastily written on the paper was the word “Acquitted.”

“If you had sent the message, ‘Recalled to Life,’ again,” muttered Jerry, as he turned, “I should have known what you meant, this time.”

He had no opportunity of saying, or so much as thinking, anything else, until he was clear of the Old Bailey; for, the crowd came pouring out with a vehemence that nearly took him off his legs, and a loud buzz swept into the street as if the baffled blue-flies were dispersing in search of other carrion. 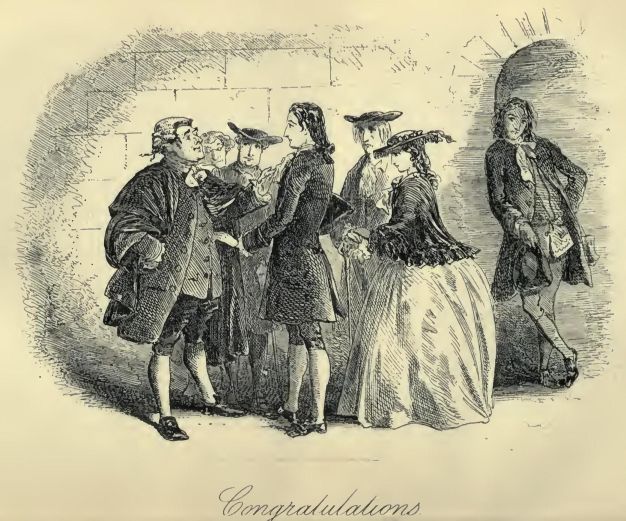