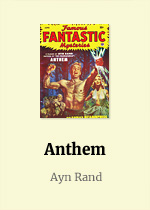 Anthem has long been hailed as one of Ayn Rand’s classic novels, and a clear predecessor to her later masterpieces, The Fountainhead and Atlas Shrugged. In Anthem, Rand examines a frightening future in which individuals have no name, no independence, and no values. Equality 7-2521 lives in the dark ages of the future where all decisions are made by committee, all people live in collectives, and all traces of individualism have been wiped out. Despite such a restrictive environment, the spark of individual thought and freedom still burns in him–a passion which he has been taught to call sinful. In a purely egalitarian world, Equality 7-2521 dares to stand apart from the herd–to think and choose for himself, to discover electricity, and to love the woman of his choice. Now he has been marked for death for committing the ultimate sin. In a world where the great “we” reign supreme, he has rediscovered the lost and holy word–“I.”

Ayn Rand (/aɪn/; born Alisa Zinovyevna Rosenbaum;[b] February 2, [O.S. January 20] 1905 – March 6, 1982) was a Russian-American writer and philosopher. She is known for her two best-selling novels, The Fountainhead and Atlas Shrugged, and for developing a philosophical system she named Objectivism. Born and educated in Russia, she moved to the United States in 1926. She had a play produced on Broadway in 1935 and 1936. After two early novels that were initially unsuccessful, she achieved fame with her 1943 novel, The Fountainhead. In 1957, Rand published her best-known work, the novel Atlas Shrugged. Afterward, she turned to non-fiction to promote her philosophy, publishing her own periodicals and releasing several collections of essays until her death in 1982.

“I stand here on the summit of the mountain. I lift my head and I spread my arms. This, my body and spirit, this is the end of the quest. I wished to know the meaning of all things. I am the meaning. I wished to find a warrant for being. I need no warrant for being, and no word of sanction upon my being. I am the warrant and the sanction. Neither am I the means to any end others may wish to accomplish. I am not a tool for their use. I am not a servant of their needs. I am not a sacrifice on their alters.”