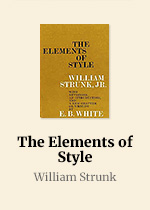 The Elements of Style

The Elements of Style is an American English writing style guide in numerous editions. The original was composed by William Strunk Jr. in 1918, and published by Harcourt in 1920, comprising eight “elementary rules of usage”, ten “elementary principles of composition”, “a few matters of form”, a list of 49 “words and expressions commonly misused”, and a list of 57 “words often misspelled”. E. B. White greatly enlarged and revised the book for publication by Macmillan in 1959. That was the first edition of the so-called Strunk & White, which Time named in 2011 as one of the 100 best and most influential books written in English since 1923.

William Strunk Jr. (July 1, 1869 – September 26, 1946) was an American professor of English at Cornell University and author of The Elements of Style (1918). After revision and enlargement by his former student E. B. White, it became a highly influential guide to English usage during the late 20th century, commonly called Strunk & White.

“To achieve style, begin by affecting none.”

“The mind travels faster than the pen; consequently, writing becomes a question of learning to make occasional wing shots, bringing down the bird of thought as it flashes by. A writer is a gunner, sometimes waiting in the blind for something to come in, sometimes roaming the countryside hoping to scare something up.”

“Vigorous writing is concise. A sentence should contain no unnecessary words, a paragraph no unnecessary sentences, for the same reason that a drawing should have no unnecessary lines and a machine no unnecessary parts. This requires not that the writer make all his sentences short, or that he avoid all detail and treat his subjects only in outline, but that every word tell.”