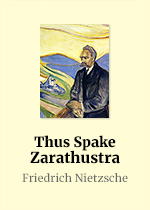 Thus Spake Zarathustra: A Book for All and None (German: Also sprach Zarathustra: Ein Buch für Alle und Keinen, also translated as Thus Spake Zarathustra) is a philosophical novel by German philosopher Friedrich Nietzsche, composed in four parts written and published between 1883 and 1885. Much of the work deals with ideas such as the “eternal recurrence of the same,” the parable on the “death of God,” and the “prophecy” of the Übermensch, which were first introduced in The Gay Science. Nietzsche himself considered Zarathustra to be his magnum opus.

Friedrich Wilhelm Nietzsche (15 October 1844 – 25 August 1900) was a German philosopher, cultural critic, composer, poet, and philologist whose work has exerted a profound influence on modern intellectual history. He began his career as a classical philologist before turning to philosophy. He became the youngest person ever to hold the Chair of Classical Philology at the University of Basel in 1869 at the age of 24. Nietzsche resigned in 1879 due to health problems that plagued him most of his life; he completed much of his core writing in the following decade. In 1889, at age 44, he suffered a collapse and afterward a complete loss of his mental faculties.

“I am a forest, and a night of dark trees: but he who is not afraid of my darkness, will find banks full of roses under my cypresses.”

“The higher we soar the smaller we appear to those who cannot fly.”

“you must be ready to burn yourself in your own flame;
how could you rise anew if you have not first become ashes?”

“Silence is worse; all truths that are kept silent become poisonous.”

“The lonely one offers his hand too quickly to whomever he encounters.”