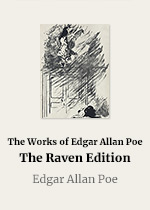 The Works of Edgar Allan Poe, The Raven Edition

Edgar Allan Poe was a master of tales of the mysterious and macabre. From the eerie incantations of “The Raven” to the persistent fright of “The Tell-Tale Heart,” his stories and poems are unforgettable explorations of the darker side of life that still offer lessons and insight into human behavior today, making them an integral component of just about any library.

Edgar Allan Poe (January 19, 1809 – October 7, 1849) was an American writer, poet, editor, and literary critic. Poe is best known for his poetry and short stories, particularly his tales of mystery and the macabre. He is widely regarded as a central figure of Romanticism in the United States and of American literature as a whole, and he was one of the country’s earliest practitioners of the short story. He is also generally considered the inventor of the detective fiction genre and is further credited with contributing to the emerging genre of science fiction. Poe was the first well-known American writer to earn a living through writing alone, resulting in a financially difficult life and career.

“I became insane, with long intervals of horrible sanity.”

“All that we see or seem is but a dream within a dream.”

“We loved with a love that was more than love.”

“I have great faith in fools – self-confidence my friends will call it.”

“I was never really insane except upon occasions when my heart was touched.”

“Believe nothing you hear, and only one half that you see.”

To learn to read is to light a fire; every syllable that is spelled out is a spark. – Victor Hugo© 2023 fictionforest.com