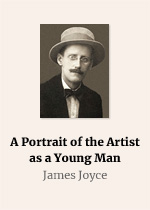 A Portrait of the Artist as a Young Man

A Portrait of the Artist as a Young Man is the first novel of Irish writer James Joyce. A Künstlerroman written in a modernist style, it traces the religious and intellectual awakening of young Stephen Dedalus, Joyce’s fictional alter ego, whose surname alludes to Daedalus, Greek mythology’s consummate craftsman. Stephen questions and rebels against the Catholic and Irish conventions under which he has grown, culminating in his self-exile from Ireland to Europe. The work uses techniques that Joyce developed more fully in Ulysses (1922) and Finnegans Wake (1939).The publication of A Portrait and the short story collection Dubliners (1914) earned Joyce a place at the forefront of literary modernism.

James Augustine Aloysius Joyce (2 February 1882 – 13 January 1941) was an Irish novelist, short story writer, poet, and literary critic. He contributed to the modernist avant-garde movement and is regarded as one of the most influential and important writers of the 20th century. Joyce’s novel Ulysses (1922) is a landmark in which the episodes of Homer’s Odyssey are paralleled in a variety of literary styles, particularly stream of consciousness. Other well-known works are the short-story collection Dubliners (1914), and the novels A Portrait of the Artist as a Young Man (1916) and Finnegans Wake (1939). His other writings include three books of poetry, a play, letters, and occasional journalism.

Joyce was born in Dublin into a middle-class family. A brilliant student, he attended the Jesuit Clongowes Wood College in County Kildare, then, briefly, the Christian Brothers-run O’Connell School. Despite the chaotic family life imposed by his father’s unpredictable finances, he excelled at the Jesuit Belvedere College and graduated from University College in Dublin in 1902. In 1904, he met his future wife Nora Barnacle and they moved to mainland Europe. He briefly worked in Pula and then moved to Trieste in Austria-Hungary, working as an English instructor. Except for an eight-month stay in Rome working as a correspondence clerk and three visits to Dublin, Joyce resided there until 1915. In Trieste, he published his book of poems Chamber Music and his short story collection Dubliners, and he began serially publishing A Portrait of the Artist as a Young Man in the English magazine The Egoist. During most of World War I, Joyce lived in Zürich, Switzerland and worked on Ulysses. After the war, he briefly returned to Trieste and then moved to Paris in 1920, which became his primary residence until 1940.

Ulysses was first published in Paris in 1922, but its publication in England and the United States was prohibited because of its perceived obscenity. Copies were smuggled into both countries and pirated versions were printed until the mid-1930s, when publication finally became legal. Joyce started his next major work, Finnegans Wake, in 1923, publishing it sixteen years later in 1939. Between these years, Joyce travelled widely. He and Nora were married in a civil ceremony in London in 1930. He made a number of trips to Switzerland, frequently seeking treatment for his increasingly severe eye problems and psychological help for his daughter, Lucia. When France was occupied by Germany during World War II, Joyce moved back to Zürich in 1940. He died there in 1941 after surgery for a perforated ulcer, less than one month before his 59th birthday.

Ulysses frequently ranks high in lists of great books of literature, and the academic literature analysing his work is extensive and ongoing. Many writers, film-makers, and other artists have been influenced by his stylistic innovations, such as his meticulous attention to detail, use of interior monologue, wordplay, and the radical transformation of traditional plot and character development. Though most of his adult life was spent abroad, his fictional universe centres on Dublin and is largely populated by characters who closely resemble family members, enemies and friends from his time there. Ulysses in particular is set in the streets and alleyways of the city. Joyce is quoted as saying, “For myself, I always write about Dublin, because if I can get to the heart of Dublin I can get to the heart of all the cities of the world. In the particular is contained the universal.”

“His heart danced upon her movements like a cork upon a tide. He heard what her eyes said to him from beneath their cowl and knew that in some dim past, whether in life or revery, he had heard their tale before.”

“I will tell you what I will do and what I will not do. I will not serve that in which I no longer believe, whether it calls itself my home, my fatherland, or my church: and I will try to express myself in some mode of life or art as freely as I can and as wholly as I can, using for my defense the only arms I allow myself to use — silence, exile, and cunning.”

“You made me confess the fears that I have. But I will tell you also what I do not fear. I do not fear to be alone or to be spurned for another or to leave whatever I have to leave. And I am not afraid to make a mistake, even a great mistake, a lifelong mistake and perhaps as long as eternity too.”

“He wanted to cry quietly but not for himself: for the words, so beautiful and sad, like music.”

“Welcome, O life! I go to encounter for the millionth time the reality of experience and to forge in the smithy of my soul the uncreated conscience of my race.”

“Her lips touched his brain as they touched his lips, as though they were a vehicle of some vague speech and between them he felt an unknown and timid preasure, darker than the swoon of sin, softer than sound or odor.”