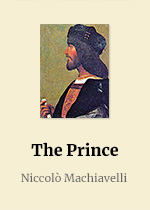 The Prince (Italian: Il Principe [il ˈprintʃipe], Latin: De Principatibus) is a 16th-century political treatise by the Italian diplomat and political theorist Niccolò Machiavelli. From his correspondence, a version appears to have been distributed in 1513, using a Latin title, De Principatibus (Of Principalities). However, the printed version was not published until 1532, five years after Machiavelli’s death. This was carried out with the permission of the Medici pope Clement VII, but “long before then, in fact since the first appearance of The Prince in manuscript, controversy had swirled about his writings”.

Although The Prince was written as if it were a traditional work in the mirrors for princes style, it is generally agreed that it was especially innovative. This is partly because it was written in the vernacular Italian rather than Latin, a practice that had become increasingly popular since the publication of Dante’s Divine Comedy and other works of Renaissance literature.

The Prince is sometimes claimed to be one of the first works of modern philosophy, especially modern political philosophy, in which the “effectual” truth is taken to be more important than any abstract ideal. It is also notable for being in direct conflict with the dominant Catholic and scholastic doctrines of the time, particularly those concerning politics and ethics.

Niccolò di Bernardo dei Machiavelli (3 May 1469 – 21 June 1527) was an Italian Renaissance diplomat, philosopher and writer, best known for The Prince (Il Principe), written in 1513. He has often been called the father of modern political philosophy or political science.

For many years he served as a senior official in the Florentine Republic with responsibilities in diplomatic and military affairs. He wrote comedies, carnival songs, and poetry. His personal correspondence is of high importance to historians and scholars. He worked as secretary to the Second Chancery of the Republic of Florence from 1498 to 1512, when the Medici were out of power.

“Everyone sees what you appear to be, few experience what you really are.”

“If an injury has to be done to a man it should be so severe that his vengeance need not be feared.”

“The lion cannot protect himself from traps, and the fox cannot defend himself from wolves. One must therefore be a fox to recognize traps, and a lion to frighten wolves.”

“The first method for estimating the intelligence of a ruler is to look at the men he has around him.”

“There is no other way to guard yourself against flattery than by making men understand that telling you the truth will not offend you.”

“Never attempt to win by force what can be won by deception.”