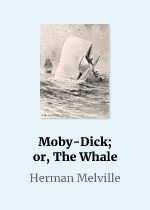 MOBY-DICK; or, THE WHALE

“It is the horrible texture of a fabric that should be woven of ships’ cables and hawsers. A Polar wind blows through it, and birds of prey hover over it.”

So Melville wrote of his masterpiece, one of the greatest works of imagination in literary history. In part, Moby-Dick is the story of an eerily compelling madman pursuing an unholy war against a creature as vast and dangerous and unknowable as the sea itself. But more than just a novel of adventure, more than an encyclopaedia of whaling lore and legend, the book can be seen as part of its author’s lifelong meditation on America. Written with wonderfully redemptive humour, Moby-Dick is also a profound inquiry into character, faith, and the nature of perception.

Herman Melville (August 1, 1819 – September 28, 1891) was an American novelist, short story writer, essayist, and poet. His first two books gained much attention, though they were not bestsellers, and his popularity declined precipitously only a few years later. By the time of his death he had been almost completely forgotten, but his longest novel, Moby Dick — largely considered a failure during his lifetime, and most responsible for Melville’s fall from favor with the reading public — was rediscovered in the 20th century as one of the chief literary masterpieces of both American and world literature.

“I know not all that may be coming, but be it what it will, I’ll go to it laughing.”

“It is not down on any map; true places never are.”

“Better to sleep with a sober cannibal than a drunk Christian.”

“As for me, I am tormented with an everlasting itch for things remote. I love to sail forbidden seas, and land on barbarous coasts.”