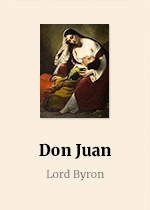 In English literature, Don Juan (1819–1824), by Lord Byron, is a satirical, epic poem that portrays Don Juan not as a womaniser, but as a man easily seduced by women. Lord Byron derived the character, but not the story, from the Spanish legend of Don Juan. Upon initial publication in 1819, cantos I and II were criticised as immoral, because the author Byron too freely ridiculed the social subjects, the persons, and the personages of his time. At his death in 1824, Lord Byron had written sixteen of seventeen cantos, whilst canto XVII went unfinished.

George Gordon Byron, 6th Baron Byron FRS (Greek: Λόρδος Βύρωνας, romanized: Lórdos Výronas; 22 January 1788 – 19 April 1824), simply known as Lord Byron, was an English poet and peer. One of the leading figures of the Romantic movement, Byron is regarded as one of the greatest English poets. He remains widely read and influential. Among his best-known works are the lengthy narrative poems Don Juan and Childe Harold’s Pilgrimage; many of his shorter lyrics in Hebrew Melodies also became popular.

“All who joy would win
Must share it — Happiness was born a twin.”

“Tis strange,-but true; for truth is always strange;
Stranger than fiction: if it could be told,
How much would novels gain by the exchange!
How differently the world would men behold!”

“My heart in passion, and my head on rhymes.”

You can never get a cup of tea large enough or a book long enough to suit me. – C.S. Lewis© 2023 fictionforest.com