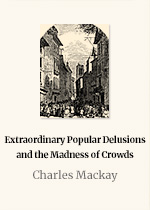 Extraordinary Popular Delusions and the Madness of Crowds

Extraordinary Popular Delusions and the Madness of Crowds is an early study of crowd psychology by Scottish journalist Charles Mackay, first published in 1841 under the title Memoirs of Extraordinary Popular Delusions. The book was published in three volumes: “National Delusions”, “Peculiar Follies”, and “Philosophical Delusions”. Mackay was an accomplished teller of stories, though he wrote in a journalistic and somewhat sensational style.

The subjects of Mackay’s debunking include alchemy, crusades, duels, economic bubbles, fortune-telling, haunted houses, the Drummer of Tedworth, the influence of politics and religion on the shapes of beards and hair, magnetisers (influence of imagination in curing disease), murder through poisoning, prophecies, popular admiration of great thieves, popular follies of great cities, and relics. Present-day writers on economics, such as Michael Lewis and Andrew Tobias, laud the three chapters on economic bubbles.

Mackay became a journalist in London: in 1834 he was an occasional contributor to The Sun. From the spring of 1835 till 1844 he was assistant sub-editor of the Morning Chronicle. In the autumn of 1839 he spent a month’s holiday in Scotland, witnessing the Eglintoun Tournament, which he described in the Chronicle, and making acquaintances in Edinburgh. In the autumn of 1844, he moved to Scotland, and became editor of the Glasgow Argus, resigning in 1847. He worked for the Illustrated London News in 1848, becoming editor in 1852.

Mackay published Songs and Poems (1834), a History of London, The Thames and its Tributaries or, Rambles Among the Rivers (1840), Extraordinary Popular Delusions and the Madness of Crowds (1841), and a romance entitled Longbeard. He is also remembered for his Gaelic Etymology of the Languages of Western Europe and the later Dictionary of Lowland Scotch.

“Men, it has been well said, think in herds; it will be seen that they go mad in herds, while they only recover their senses slowly, one by one.”

“In reading The History of Nations, we find that, like individuals, they have their whims and their peculiarities, their seasons of excitement and recklessness, when they care not what they do. We find that whole communities suddenly fix their minds upon one object and go mad in its pursuit; that millions of people become simultaneously impressed with one delusion, and run after it, till their attention is caught by some new folly more captivating than the first.”

“I never lost money by turning a profit.”

To acquire the habit of reading is to construct for yourself a refuge from almost all the miseries of life. – W. Somerset Maugham© 2022 fictionforest.com