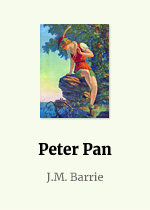 Peter Pan is a fictional character created by Scottish novelist and playwright J. M. Barrie. A free-spirited and mischievous young boy who can fly and never grows up, Peter Pan spends his never-ending childhood having adventures on the mythical island of Neverland as the leader of the Lost Boys, interacting with fairies, pirates, mermaids, Native Americans, and occasionally ordinary children from the world outside Neverland.

Sir James Matthew Barrie, 1st Baronet, OM (9 May 1860 – 19 June 1937) was a Scottish novelist and playwright, best remembered as the creator of Peter Pan. He was born and educated in Scotland and then moved to London, where he wrote a number of successful novels and plays. There he met the Llewelyn Davies boys, who inspired him to write about a baby boy who has magical adventures in Kensington Gardens (first included in Barrie’s 1902 adult novel The Little White Bird), then to write Peter Pan, or The Boy Who Wouldn’t Grow Up, a 1904 “fairy play” about an ageless boy and an ordinary girl named Wendy who have adventures in the fantasy setting of Neverland.

Although he continued to write successfully, Peter Pan overshadowed his other work, and is credited with popularising the name Wendy. Barrie unofficially adopted the Davies boys following the deaths of their parents. Barrie was made a baronet by George V on 14 June 1913, and a member of the Order of Merit in the 1922 New Year Honours. Before his death, he gave the rights to the Peter Pan works to Great Ormond Street Hospital for Children in London, which continues to benefit from them.

“To die will be an awfully big adventure.”

“All the world is made of faith, and trust, and pixie dust.”

“Never say goodbye because goodbye means going away and going away means forgetting.”

“The moment you doubt whether you can fly, you cease for ever to be able to do it.”

“Dreams do come true, if only we wish hard enough. You can have anything in life if you will sacrifice everything else for it.”

I read for pleasure and that is the moment I learn the most. – Margaret Atwood© 2022 fictionforest.com