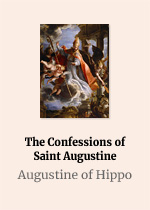 The Confessions of St. Augustine

Confessions (Latin: Confessiones) is the name of an autobiographical work by Saint Augustine of Hippo, written in Latin between 397 and 400 AD. The work outlines Saint Augustine’s sinful youth and his conversion to Christianity. Modern English translations of it are sometimes published under the title The Confessions of Saint Augustine in order to distinguish the book from other books with similar titles.

Confessions is generally considered one of Augustine’s most important texts. It is widely seen as the first Western Christian autobiography ever written, and was an influential model for Christian writers throughout the Middle Ages. Professor Henry Chadwick wrote that Confessions will “always rank among the great masterpieces of western literature.”

In the work, Augustine writes about how much he regrets having led a sinful and immoral life. He discusses his regrets for following the Manichaean religion and believing in astrology. He writes about his friend Nebridius’s role in helping to persuade him that astrology was not only incorrect but evil, and Saint Ambrose’s role in his conversion to Christianity. The first nine books are autobiographical and the last four are commentary and significantly more philosophical. He shows intense sorrow for his sexual sins and writes on the importance of sexual morality.

Augustine of Hippo (Latin: Aurelius Augustinus Hipponensis; 13 November 354 – 28 August 430 AD[20]), also known as Saint Augustine, was a theologian, philosopher, and the bishop of Hippo Regius in Numidia, Roman North Africa. His writings influenced the development of Western philosophy and Western Christianity, and he is viewed as one of the most important Church Fathers of the Latin Church in the Patristic Period. His many important works include The City of God, On Christian Doctrine, and Confessions.

“Thou hast made us for thyself, O Lord, and our heart is restless until it finds its rest in thee.”

“And men go abroad to admire the heights of mountains, the mighty waves of the sea, the broad tides of rivers, the compass of the ocean, and the circuits of the stars, yet pass over the mystery of themselves without a thought.”

“The punishment of every disordered mind is its own disorder.”

“What does love look like? It has the hands to help others. It has the feet to hasten to the poor and needy. It has eyes to see misery and want. It has the ears to hear the sighs and sorrows of men. That is what love looks like.”

“How can the past and future be, when the past no longer is, and the future is not yet? As for the present, if it were always present and never moved on to become the past, it would not be time, but eternity.”