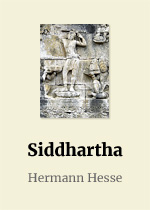 Siddhartha is a 1922 novel by Hermann Hesse that deals with the spiritual journey of self-discovery of a man named Siddhartha during the time of the Gautama Buddha. The book, Hesse’s ninth novel, was written in German, in a simple, lyrical style. It was published in the U.S. in 1951 and became influential during the 1960s. Hesse dedicated the first part of it to Romain Rolland and the second part to Wilhelm Gundert, his cousin.

The word Siddhartha is made up of two words in Sanskrit language, siddha (achieved) + artha (what was searched for), which together means “he who has found meaning (of existence)” or “he who has attained his goals”. In fact, the Buddha’s own name, before his renunciation, was Siddhartha Gautama, Prince of Kapilavastu. In this book, the Buddha is referred to as “Gotama”.

Hermann Karl Hesse (2 July 1877 – 9 August 1962) was a German-born Swiss poet, novelist, and painter. His best-known works include Demian, Steppenwolf, Siddhartha, and The Glass Bead Game, each of which explores an individual’s search for authenticity, self-knowledge and spirituality. In 1946, he received the Nobel Prize in Literature.

“Wisdom cannot be imparted. Wisdom that a wise man attempts to impart always sounds like foolishness to someone else … Knowledge can be communicated, but not wisdom. One can find it, live it, do wonders through it, but one cannot communicate and teach it.”

“When someone seeks,” said Siddhartha, “then it easily happens that his eyes see only the thing that he seeks, and he is able to find nothing, to take in nothing because he always thinks only about the thing he is seeking, because he has one goal, because he is obsessed with his goal. Seeking means: having a goal. But finding means: being free, being open, having no goal.”

“It is not for me to judge another man’s life. I must judge, I must choose, I must spurn, purely for myself. For myself, alone.”

“I have always believed, and I still believe, that whatever good or bad fortune may come our way we can always give it meaning and transform it into something of value.”

“What could I say to you that would be of value, except that perhaps you seek too much, that as a result of your seeking you cannot find.”