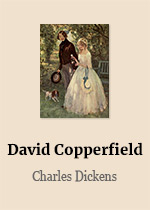 David Copperfield is the eighth novel by Charles Dickens. The novel features the character David Copperfield, and is written in the first person, as a description of his life until middle age, with his own adventures and the numerous friends and enemies he meets along his way. It is his journey of change and growth from infancy to maturity, as people enter and leave his life and he passes through the stages of his development. It is often described as Dickens’ masterpiece, “the triumph of the art of Dickens”, which marks a turning point in his work, the point of separation between the novels of youth and those of maturity. Though written in the first person, David Copperfield is considered to be more than an autobiography, going beyond this framework in the richness of its themes and the originality of its writing, which makes it a true autobiographical novel. In the words of the author, this novel was “a very complicated weaving of truth and invention”. Some elements of the novel follow events in Dickens’s own life. It was Dickens’ favourite among his own novels. In the preface to the 1867 edition, Dickens wrote, “like many fond parents, I have in my heart of hearts a favourite child. And his name is David Copperfield.”

David Copperfield is a fictional biography, describing the title character’s life. David narrates the novel himself. Some of the information in the novel is autobiographical and relates to Charles Dickens’s own life. David had a difficult life from the beginning. His father died before he was born. When David’s mother remarries, his stepfather is abusive and sends him off to a boarding school overseen by a cruel and abusive headmaster. One positive outcome of the school is that David makes two close friends. David’s mother dies when he is twelve, and his stepfather sends him off to live with the Micawber family in London and work in his stepfather’s warehouse. David is unhappy working at the warehouse and runs away to his Aunt Betsy. His aunt sends him to live with the Wickfield family and attend a school in Canterbury. Although he loves Agnes Wickfield, David ends up falling in love with Dora Spenlow, the daughter of an attorney who tutors David. The Wickfields’ law clerk, Uriah Heep, is revealed by David’s friends to be stealing from Mr. Wickfield. The Micawbers end up moving to Australia, while David becomes a writer. When Dora dies, David marries Agnes Wickfield.

“Procrastination is the thief of time, collar him.”

“Whether I shall turn out to be the hero of my own life, or whether that station will be held by anybody else, these pages must show.”

“My advice is, never do to-morrow what you can do today. Procrastination is the thief of time. Collar him!”

“There can be no disparity in marriage like unsuitability of mind and purpose.”