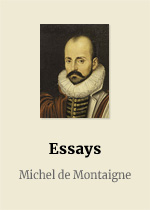 The Essays (French: Essais, pronounced [esɛ]) of Michel de Montaigne are contained in three books and 107 chapters of varying length. They were originally written in Middle French and were originally published in the Kingdom of France. Montaigne’s stated design in writing, publishing and revising the Essays over the period from approximately 1570 to 1592 was to record “some traits of my character and of my humours.” The Essays were first published in 1580 and cover a wide range of topics.

Michel Eyquem de Montaigne (28 February 1533 – 13 September 1592), also known as Lord of Montaigne, was one of the most significant philosophers of the French Renaissance, known for popularizing the essay as a literary genre. His work is noted for its merging of casual anecdotes and autobiography with intellectual insight. His massive volume Essais contains some of the most influential essays ever written. Montaigne had a direct influence on Western writers including Francis Bacon, René Descartes, Blaise Pascal, Jean-Jacques Rousseau, Virginia Woolf, Albert Hirschman, William Hazlitt, Ralph Waldo Emerson, Friedrich Nietzsche, Stefan Zweig, Eric Hoffer, Isaac Asimov, and possibly, on the later works of William Shakespeare.

During his lifetime, Montaigne was admired more as a statesman than as an author. The tendency in his essays to digress into anecdotes and personal ruminations was seen as detrimental to proper style rather than as an innovation, and his declaration that, “I am myself the matter of my book”, was viewed by his contemporaries as self-indulgent. In time, however, Montaigne came to be recognized as embodying, perhaps better than any other author of his time, the spirit of freely entertaining doubt that began to emerge at that time. He is most famously known for his skeptical remark, “Que sçay-je?” (“What do I know?”, in Middle French; now rendered as Que sais-je? in modern French).

“When I am attacked by gloomy thoughts, nothing helps me so much as running to my books. They quickly absorb me and banish the clouds from my mind.”

“To forbid us anything is to make us have a mind for it.”

“Let us give Nature a chance; she knows her business better than we do.”

“There is no desire more natural than the desire of knowledge. (Il n’est desir plus naturel que le desir de connaissance)”