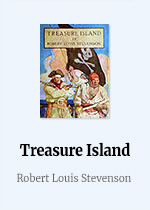 Treasure Island (originally The Sea Cook: A Story for Boys) is an adventure novel by Scottish author Robert Louis Stevenson, narrating a tale of “buccaneers and buried gold.” Its influence is enormous on popular perceptions of pirates, including such elements as treasure maps marked with an “X”, schooners, the Black Spot, tropical islands, and one-legged seamen bearing parrots on their shoulders.

As one of the most frequently dramatised of all novels, Treasure Island was originally considered a coming-of-age story and is noted for its atmosphere, characters, and action. It was originally serialised in the children’s magazine Young Folks from 1881 through 1882 under the title Treasure Island or the mutiny of the Hispaniola, credited to the pseudonym “Captain George North”. It was first published as a book on 14 November 1883.

Robert Louis Balfour Stevenson (13 November 1850 – 3 December 1894) was a Scottish novelist, poet, and travel writer, and a leading representative of English literature. He was greatly admired by many authors, including Jorge Luis Borges, Ernest Hemingway, Rudyard Kipling and Vladimir Nabokov.

Most modernist writers dismissed him, however, because he was popular and did not write within their narrow definition of literature. It is only recently that critics have begun to look beyond Stevenson’s popularity and allow him a place in the Western canon.

“Sir, with no intention to take offence, I deny your right to put words into my mouth.”

“Seaward ho! Hang the treasure! It’s the glory of the sea that has turned my head.”

“If you keep on drinking rum, the world will soon be quit of a very dirty scoundrel!”