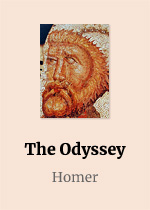 The Odyssey is one of two major Ancient Greek epic poems attributed to Homer. It is one of the oldest extant works of literature still read by contemporary audiences.

As with the Iliad, the poem is divided into 24 books. It follows the Greek hero Odysseus, king of Ithaca, and his journey home after winning the Trojan War. It takes Odysseus ten years to reach Ithaca after the ten-year Trojan War. In his absence, Odysseus is assumed dead, and his wife Penelope and son Telemachus must contend with a group of unruly suitors who compete for Penelope’s hand in marriage.

Homer (/ˈhoʊmər/; Ancient Greek: Ὅμηρος Greek pronunciation: [hómɛːros], Hómēros) is the presumed author of the Iliad and the Odyssey, two epic poems that are the central works of ancient Greek literature. The Iliad is set during the Trojan War, the ten-year siege of the city of Troy by a coalition of Greek kingdoms. It focuses on a quarrel between King Agamemnon and the warrior Achilles lasting a few weeks during the last year of the war. The Odyssey focuses on the ten-year journey home of Odysseus, king of Ithaca, after the fall of Troy. Many accounts of Homer’s life circulated in classical antiquity, the most widespread being that he was a blind bard from Ionia, a region of central coastal Anatolia in present-day Turkey. Modern scholars consider these accounts legendary.

“Of all creatures that breathe and move upon the earth, nothing is bred that is weaker than man.”

“There is a time for many words, and there is also a time for sleep.”

“There is nothing more admirable than when two people who see eye to eye keep house as man and wife, confounding their enemies and delighting their friends.”

“Be strong, saith my heart; I am a soldier;I have seen worse sights than this.”