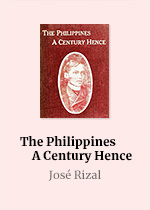 The Philippines a Century Hence

The Philippines a Century Hence, which was published in La Solidaridad as a series in four parts between September 30, 1889, and February 1, 1890, contains José Rizal’s predictions on the possible future of the Philippines within a hundred years (Rizal was executed in 1896 by the Spanish government), formulated on then present conditions and circumstances. Rizal notes several possibilities: that the Philippines would stay a Spanish colony provided its citizens receive not only the rights and privileges of citizens of the Spanish crown, but also the inherent rights of a human being; that the Philippines would inevitably rise in revolt against Spain if continuously exploited and abused, citing several historical events as examples; and that the Philippines might be conquered by other nations after Spain’s presence in the country is extinguished. Rizal also explains the various factors contributing to every possibility, and how the Filipino/Malayan psyche might exacerbate or mitigate these factors.

José Protasio Rizal Mercado y Alonso Realonda was a Filipino polymath, nationalist and the most prominent advocate for reforms in the Philippines during the Spanish colonial era. He is considered the Philippines’ national hero and the anniversary of Rizal’s death is commemorated as a Philippine holiday called Rizal Day. Rizal’s 1896 military trial and execution made him a martyr of the Philippine Revolution.

The seventh of eleven children born to a wealthy family in the town of Calamba, Laguna, Rizal attended the Ateneo Municipal de Manila, earning a Bachelor of Arts. He enrolled in Medicine and Philosophy and Letters at the University of Santo Tomas and then traveled alone to Madrid, Spain, where he continued his studies at the Universidad Central de Madrid, earning the degree of Licentiate in Medicine. He attended the University of Paris and earned a second doctorate at the University of Heidelberg. Rizal was a polyglot conversant in at least ten languages. He was a prolific poet, essayist, diarist, correspondent, and novelist whose most famous works were his two novels, Noli me Tangere and El filibusterismo. These are social commentaries on the Philippines that formed the nucleus of literature that inspired dissent among peaceful reformists and spurred the militancy of armed revolutionaries against the Spanish colonial authorities.

As a political figure, Rizal was the founder of La Liga Filipina, a civic organization that subsequently gave birth to the Katipunan led by Andrés Bonifacio and Emilio Aguinaldo. He was a proponent of institutional reforms by peaceful means rather than by violent revolution. The general consensus among Rizal scholars, however, attributed his martyred death as the catalyst that precipitated the Philippine Revolution.