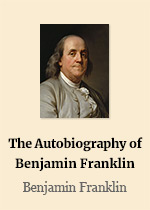 The Autobiography of Benjamin Franklin

The Autobiography of Benjamin Franklin is the traditional name for the unfinished record of his own life written by Benjamin Franklin from 1771 to 1790; however, Franklin himself appears to have called the work his Memoirs. Although it had a tortuous publication history after Franklin’s death, this work has become one of the most famous and influential examples of an autobiography ever written.

Benjamin Franklin FRS FRSA FRSE (January 17, 1706 [O.S. January 6, 1706] – April 17, 1790) was an American polymath and one of the Founding Fathers of the United States. Franklin was a leading writer, printer, political philosopher, politician, Freemason, postmaster, scientist, inventor, humorist, civic activist, statesman, and diplomat. As a scientist, he was a major figure in the American Enlightenment and the history of physics for his discoveries and theories regarding electricity. As an inventor, he is known for the lightning rod, bifocals, and the Franklin stove, among other inventions. He founded many civic organizations, including the Library Company, Philadelphia’s first fire department, and the University of Pennsylvania.

Franklin earned the title of “The First American” for his early and indefatigable campaigning for colonial unity, initially as an author and spokesman in London for several colonies. As the first United States ambassador to France, he exemplified the emerging American nation. Franklin was foundational in defining the American ethos as a marriage of the practical values of thrift, hard work, education, community spirit, self-governing institutions, and opposition to authoritarianism both political and religious, with the scientific and tolerant values of the Enlightenment. In the words of historian Henry Steele Commager, “In a Franklin could be merged the virtues of Puritanism without its defects, the illumination of the Enlightenment without its heat.” To Walter Isaacson, this makes Franklin “the most accomplished American of his age and the most influential in inventing the type of society America would become.”

“Were I a Roman Catholic, perhaps I should on this occasion vow to build a chapel to some saint, but as I am not, if I were to vow at all, it should be to build a light-house.

Letter to his wife, 17 July 1757, after narrowly avoiding a shipwreck; often misquoted as “Lighthouses are more helpful than churches.”

“…there will be sleeping enough in the grave….”

“When the well is dry we know the value of water”

“Reading was the only amusement I allowed myself”

“They who would give up essential Liberty, to purchase a little temporary Safety, deserve neither Liberty nor Safety.