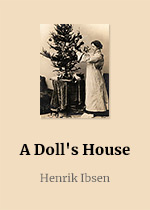 A Doll’s House is a three-act play written by Norway’s Henrik Ibsen. It premiered at the Royal Theatre in Copenhagen, Denmark, on 21 December 1879, having been published earlier that month. The play is set in a Norwegian town circa 1879.

The play is significant for the way it deals with the fate of a married woman, who at the time in Norway lacked reasonable opportunities for self-fulfillment in a male-dominated world, despite the fact that Ibsen denies it was his intent to write a feminist play. It aroused a great sensation at the time, and caused a “storm of outraged controversy” that went beyond the theatre to the world newspapers and society.

In 2006, the centennial of Ibsen’s death, A Doll’s House held the distinction of being the world’s most performed play that year. UNESCO has inscribed Ibsen’s autographed manuscripts of A Doll’s House on the Memory of the World Register in 2001, in recognition of their historical value.

The title of the play is most commonly translated as A Doll’s House, though some scholars use A Doll House. John Simon says that A Doll’s House is “the British term for what [Americans] call a ‘dollhouse'”. Egil Törnqvist says of the alternative title: “Rather than being superior to the traditional rendering, it simply sounds more idiomatic to Americans.”

Henrik Johan Ibsen (/ˈɪbsən/;[1] Norwegian: [ˈhɛ̀nrɪk ˈɪ̀psn̩]; 20 March 1828 – 23 May 1906) was a Norwegian playwright and theatre director. As one of the founders of modernism in theatre, Ibsen is often referred to as “the father of realism” and one of the most influential playwrights of his time.

His plays were considered scandalous to many of his era, when Victorian values of family life and propriety largely held sway in Europe and any challenge to them was considered immoral and outrageous. Ibsen’s work examined the realities that lay behind many facades, possessing a revelatory nature that was disquieting to many contemporaries.

Ibsen largely founded the modern stage by introducing a critical eye and free inquiry into the conditions of life and issues of morality. Victorian-era plays were expected to be moral dramas with noble protagonists pitted against darker forces; every drama was expected to result in a morally appropriate conclusion, meaning that goodness was to bring happiness, and immorality pain. Ibsen challenged this notion and the beliefs of his times and shattered the illusions of his audiences.

“You have never loved me. You have only thought it pleasant to be in love with me.”

“You see, there are some people that one loves, and others that perhaps one would rather be with.”

“I must make up my mind which is right – society or I.”

“HELMER: But this is disgraceful. Is this the way you neglect your most sacred duties?

NORA: What do you consider is my most sacred duty?

HELMER: Do I have to tell you that? Isn’t it your duty to your husband and children?

NORA: I have another duty, just as sacred.

HELMER: You can’t have. What duty do you mean?

NORA: My duty to myself.”