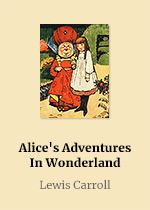 Alice’s Adventures in Wonderland (commonly shortened to Alice in Wonderland) is an 1865 novel written by English author Charles Lutwidge Dodgson under the pseudonym Lewis Carroll. It tells of a young girl named Alice falling through a rabbit hole into a subterranean fantasy world populated by peculiar, anthropomorphic creatures. The tale plays with logic, giving the story lasting popularity with adults as well as with children. It is considered to be one of the best examples of the literary genre. One of the best-known and most popular works of English-language fiction, its narrative course, structure, characters, and imagery have been enormously influential in both popular culture and literature, especially in the fantasy genre.

Lewis Carol’s Alice’s Adventures in Wonderland follows the titular protagonist through a mesmerizing dreamscape where she encounters absurd characters in surreal situations. While Alice and her sister are sitting under a tree, she sees a white rabbit that arouses her curiosity. She follows it down a hole and soon begins to realize that she has happened upon a world whose rules and possibilities are far different than her own. For example, she is able to change her size with a potion and cake, and in doing so, she becomes small enough to swim in a pool of her own tears. As she navigates wonderland, she comes across many absurd characters, such as the Manic Mad hatter and mysterious Cheshire Cat. Finally, she arrives in the court of the tyrannical Queen of Hearts, where she is called upon as a witness. As tensions escalate, Alice finally wakes from her dream, thinking momentarily that the leaves around her are playing cards.

Charles Lutwidge Dodgson (/ˈlʌtwɪdʒ ˈdɒdʒsən/; 27 January 1832 – 14 January 1898), better known by his pen name Lewis Carroll, was an English writer of children’s fiction, notably Alice’s Adventures in Wonderland and its sequel Through the Looking-Glass. He was noted for his facility at word play, logic, and fantasy. The poems Jabberwocky and The Hunting of the Snark are classified in the genre of literary nonsense. He was also a mathematician, photographer, inventor and Anglican deacon.

“How puzzling all these changes are! I’m never sure what I’m going to be, from one minute to another.”

“And what is the use of a book,” thought Alice, “without pictures or conversation?”

“In another moment down went Alice after it, never once considering how in the world she was to get out again.”

“That’s the reason they’re called lessons,” the Gryphon remarked: “because they lessen from day to day.”

“How long is forever? Sometimes just one second”