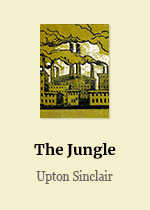 The Jungle is a 1906 novel by the American journalist and novelist Upton Sinclair (1878–1968). The novel portrays the harsh conditions and exploited lives of immigrants in the United States in Chicago and similar industrialized cities. Sinclair’s primary purpose in describing the meat industry and its working conditions was to advance socialism in the United States. However, most readers were more concerned with several passages exposing health violations and unsanitary practices in the American meat packing industry during the early 20th century, which greatly contributed to a public outcry which led to reforms including the Meat Inspection Act. Sinclair said of the public reaction, “I aimed at the public’s heart, and by accident I hit it in the stomach.”

Jurgis Rudkus, a Lithuanian immigrant, tries to make ends meet in Chicago. The book begins with his wife Ona and his wedding feast. He and his family live near the stockyards and meatpacking district where many immigrants, who do not know much English, work. He takes a job at Brown’s slaughterhouse. Jurgis had thought the US would offer more freedom, but he finds working-conditions harsh. He and his young wife struggle to survive as they fall deeply into debt and become prey to con men. Jurgis had expected to support his wife and other relatives, but eventually all—the women, children, and his sick father—seek work to survive. As the novel progresses, the jobs and means the family use to stay alive slowly lead to their physical and moral decay. Accidents at work and other events lead the family closer to catastrophe. The end of the story, a fellow socialist employs him, Jurgis locates his wife’s family and resumes his financial support of them. The book ends with another socialist rally, which follows some political victories.

Upton Beall Sinclair Jr. (September 20, 1878 – November 25, 1968) was an American writer who wrote nearly 100 books and other works in several genres. Sinclair’s work was well known and popular in the first half of the 20th century, and he won the Pulitzer Prize for Fiction in 1943.

In 1906, Sinclair acquired particular fame for his classic muck-raking novel The Jungle, which exposed labor and sanitary conditions in the U.S. meatpacking industry, causing a public uproar that contributed in part to the passage a few months later of the 1906 Pure Food and Drug Act and the Meat Inspection Act.

“They use everything about the hog except the squeal.”

“The great corporation which employed you lied to you, and lied to the whole country—from top to bottom it was nothing but one gigantic lie.”