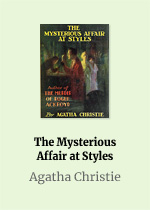 The Mysterious Affair at Styles

The Mysterious Affair at Styles is a detective novel by British writer Agatha Christie. It was written in the middle of the First World War, in 1916. Styles was Christie’s first published novel. It introduced Hercule Poirot, Inspector (later, Chief Inspector) Japp, and Arthur Hastings. Poirot, a Belgian refugee of the Great War, is settling in England near the home of Emily Inglethorp, who helped him to his new life. His friend Hastings arrives as a guest at her home. When the woman is killed, Poirot uses his detective skills to solve the mystery.

The book tells of about Hercule Poirot, a Belgian refugee of the Great War, who is settling in England near the home of his wealthy, recently widowed friend Emily Inglethorp. When the widow is found murdered via the administering of poison, Poirot uses his detective skills to solve the mystery. Featuring multiple red herrings and surprise twists, the book ushered in what is known as “The Golden Age of Detective Fiction”.

Dame Agatha Mary Clarissa Christie, Lady Mallowan, DBE (née Miller; 15 September 1890 – 12 January 1976) was an English writer known for her sixty-six detective novels and fourteen short story collections, particularly those revolving around fictional detectives Hercule Poirot and Miss Marple. She also wrote the world’s longest-running play, The Mousetrap, which was performed in the West End from 1952 to 2020, as well as six novels under the pseudonym Mary Westmacott. In 1971, she was appointed a Dame Commander of the Order of the British Empire (DBE) for her contributions to literature. Guinness World Records lists Christie as the best-selling fiction writer of all time, her novels having sold more than two billion copies.

“Instinct is a marvelous thing. It can neither be explained nor ignored.”

“You gave too much rein to your imagination. Imagination is a good servant, and a bad master. The simplest explanation is always the most likely.”

“Everything must be taken into account. If the fact will not fit the theory—let the theory go.”

“An appreciative listener is always stimulating.”