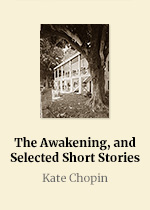 The Awakening and Selected Short Stories

The Awakening, novel by Kate Chopin, published in 1899. Originally titled A Solitary Soul, the novel depicts a young mother’s struggle to achieve sexual and personal emancipation in the oppressive environment of the postbellum American South. When it was first published, it was widely condemned for its portrayal of sexuality and marital infidelity. Today it is considered a landmark work of early feminist fiction.

Kate Chopin(Feb. 8, 1851, St. Louis, Mo., U.S. — Aug. 22, 1904, St. Louis), American novelist and short-story writer known as an interpreter of New Orleans culture. There was a revival of interest in Chopin in the late 20th century because her concerns about the freedom of women foreshadowed later feminist literary themes.

“Perhaps it is better to wake up after all, even to suffer, rather than to remain a dupe to illusions all one’s life.”

“The artist must possess the courageous soul that dares and defies”

“She missed him the days when some pretext served to take him away from her, just as one misses the sun on a cloudy day without having thought much about the sun when it was shining. ”

“Do you suppose a woman knows why she loves? Does she select? Does she say to herself, ‘Go to! here is a distinguished statesman with presidential possibilities; I shall proceed to fall in love with him.’ or, ‘I shall set my heart upon this musician, whose fame is on every tongue?’ or ‘this financier, who controls the world’s money markets?”