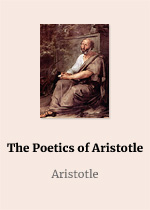 The Poetics of Aristotle

Aristotle’s Poetics is the earliest surviving work of dramatic theory and first extant philosophical treatise to focus on literary theory. In this text Aristotle offers an account of ποιητικῆς, which refers to poetry or more literally “the poetic art,” deriving from the term for “poet; author; maker,” ποιητής. Aristotle divides the art of poetry into verse drama (to include comedy, tragedy, and the satyr play), lyric poetry, and epic.

Aristotle (384–322 BC) was a Greek philosopher and polymath during the Classical period in Ancient Greece. Taught by Plato, he was the founder of the Lyceum, the Peripatetic school of philosophy, and the Aristotelian tradition. His writings cover many subjects including physics, biology, zoology, metaphysics, logic, ethics, aesthetics, poetry, theatre, music, rhetoric, psychology, linguistics, economics, politics, and government. Aristotle provided a complex synthesis of the various philosophies existing prior to him. It was above all from his teachings that the West inherited its intellectual lexicon, as well as problems and methods of inquiry. As a result, his philosophy has exerted a unique influence on almost every form of knowledge in the West and it continues to be a subject of contemporary philosophical discussion.

“Comedy aims at representing men as worse, Tragedy as better than in actual life.”

“With respect to the requirement of art, the probable impossible is always preferable to the improbable possible.”

“Accordingly, the poet should prefer probable impossibilities to improbable possibilities.”

“A likely impossibility is always preferable to an unconvincing possibility. The story should never be made up of improbable incidents; there should be nothing of the sort in it.”

I do believe something very magical can happen when you read a book. – J.K. Rowling© 2023 fictionforest.com