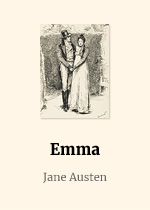 Emma, by Jane Austen, is a novel about youthful hubris and romantic misunderstandings. It is set in the fictional country village of Highbury and the surrounding estates of Hartfield, Randalls and Donwell Abbey, and involves the relationships among people from a small number of families. The novel was first published in December 1815, with its title page listing a publication date of 1816. As in her other novels, Austen explores the concerns and difficulties of genteel women living in Georgian–Regency England. Emma is a comedy of manners, and depicts issues of marriage, sex, age, and social status.

Jane Austen (16 December 1775 – 18 July 1817) was an English novelist known primarily for her six major novels, which interpret, critique and comment upon the British landed gentry at the end of the 18th century. Austen’s plots often explore the dependence of women on marriage in the pursuit of favourable social standing and economic security. Her works critique the novels of sensibility of the second half of the 18th century and are part of the transition to 19th-century literary realism.

“Silly things do cease to be silly if they are done by sensible people in an impudent way.”

“I may have lost my heart, but not my self-control. ”

“If I loved you less, I might be able to talk about it more.”

“I always deserve the best treatment because I never put up with any other.”