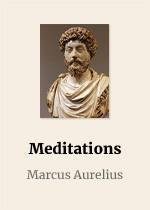 Written in Greek by the only Roman emperor who was also a philosopher, the Meditations of Marcus Aurelius offer a remarkable series of challenging spiritual reflections and exercises developed as the emperor struggled to understand himself and make sense of the universe. While the Meditations were composed to provide personal consolation and encouragement, Marcus Aurelius also created one of the greatest of all works of philosophy: a timeless collection that has been consulted and admired by statesmen, thinkers and readers throughout the centuries.

Marcus Aurelius Antoninus (26 April 121 – 17 March 180) was the Roman emperor from 161 to 180 and a Stoic philosopher. He was the last of the rulers known as the Five Good Emperors (a term coined some 13 centuries later by Niccolò Machiavelli), and the last emperor of the Pax Romana, an age of relative peace and stability for the Roman Empire. He served as Roman consul in 140, 145, and 161.

“You have power over your mind – not outside events. Realize this, and you will find strength.”

“Dwell on the beauty of life. Watch the stars, and see yourself running with them.”

“The happiness of your life depends upon the quality of your thoughts.”

“Waste no more time arguing about what a good man should be. Be one.”

“If you are distressed by anything external, the pain is not due to the thing itself, but to your estimate of it; and this you have the power to revoke at any moment.”

“When you arise in the morning think of what a privilege it is to be alive, to think, to enjoy, to love …”

“The best revenge is to be unlike him who performed the injury.”