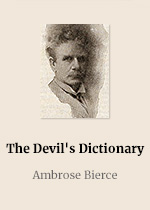 The Devil’s Dictionary is a satirical dictionary written by American Civil War soldier, journalist, and writer Ambrose Bierce consisting of common words followed by humorous and satirical definitions. The lexicon was written over three decades as a series of installments for magazines and newspapers. Bierce’s witty definitions were imitated and plagiarized for years before he gathered them into books, first as The Cynic’s Word Book in 1906 and then in a more complete version as The Devil’s Dictionary in 1911.

Ambrose Gwinnett Bierce (June 24, 1842 – circa 1914) was an American short story writer, journalist, poet, and Civil War veteran. His book The Devil’s Dictionary was named as one of “The 100 Greatest Masterpieces of American Literature” by the American Revolution Bicentennial Administration. His story “An Occurrence at Owl Creek Bridge” has been described as “one of the most famous and frequently anthologized stories in American literature”; and his book Tales of Soldiers and Civilians (also published as In the Midst of Life) was named by the Grolier Club as one of the 100 most influential American books printed before 1900.

“Quotation, n: The act of repeating erroneously the words of another.”

“Sweater, n. Garment worn by child when its mother is feeling chilly.”

“Egotist, n. A person of low taste, more interested in himself than in me.”

“Patience – A minor form of despair, disguised as a virtue.”

“Selfish, adj. Devoid of consideration for the selfishness of others.”

“Pray, v. To ask that the laws of the universe be annulled in behalf of a single petitioner, confessedly unworthy.”