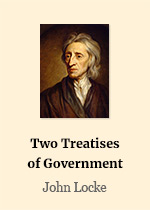 Two Treatises of Government (or Two Treatises of Government: In the Former, The False Principles, and Foundation of Sir Robert Filmer, and His Followers, Are Detected and Overthrown. The Latter Is an Essay Concerning The True Original, Extent, and End of Civil Government) is a work of political philosophy published anonymously in 1689 by John Locke. The First Treatise attacks patriarchalism in the form of sentence-by-sentence refutation of Robert Filmer’s Patriarcha, while the Second Treatise outlines Locke’s ideas for a more civilized society based on natural rights and contract theory.

John Locke FRS (/lɒk/; 29 August 1632 – 28 October 1704) was an English philosopher and physician, widely regarded as one of the most influential of Enlightenment thinkers and commonly known as the “Father of Liberalism”. Considered one of the first of the British empiricists, following the tradition of Sir Francis Bacon, Locke is equally important to social contract theory. His work greatly affected the development of epistemology and political philosophy. His writings influenced Voltaire and Jean-Jacques Rousseau, many Scottish Enlightenment thinkers, as well as the American Revolutionaries. His contributions to classical republicanism and liberal theory are reflected in the United States Declaration of Independence.

Locke’s theory of mind is often cited as the origin of modern conceptions of identity and the self, figuring prominently in the work of later philosophers such as Rousseau, David Hume, and Immanuel Kant. Locke was the first to define the self through a continuity of consciousness. He postulated that, at birth, the mind was a blank slate, or tabula rasa. Contrary to Cartesian philosophy based on pre-existing concepts, he maintained that we are born without innate ideas, and that knowledge is instead determined only by experience derived from sense perception, a concept now known as empiricism. Demonstrating the ideology of science in his observations, whereby something must be capable of being tested repeatedly and that nothing is exempt from being disproved, Locke has said that “whatever I write, as soon as I discover it not to be true, my hand shall be the forwardest to throw it into the fire.” Such is one example of Locke’s belief in empiricism. Challenging the work of others, Locke is said to have established the method of introspection, i.e. observing the emotions and behaviours of one’s self.

“The end of law is not to abolish or restrain, but to preserve and enlarge freedom.”

“I therefore took it into my hands with all the expectation and read it through with all the attention due to a Treaties, that made such a noise at its coming abroad and cannot but confess my self mightily surprised, that in a Book which was to provide Chains for all Mankind, I should find nothing but a Rope of Sand, useful perhaps to such, whose Skill and Business it is to raise a Dust, and would blind the People, the better to mislead them, but in truth is not of any force to draw those into Bondage, who have their Eyes open, and so much Sense about them as to consider, that Chains are but an Ill wearing, how much Care soever hath been taken to file and polish them.”

To learn to read is to light a fire; every syllable that is spelled out is a spark. – Victor Hugo© 2021 fictionforest.com